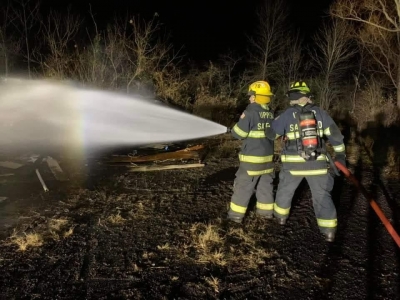 In February of 1947, a group of concerned men assembled at the Lodge Hall, located above Sterner's Garage on Old Skippack Road in Salfordville. this group of men gathered to discuss the need for a local fire company to replace a loosely organized Fire Protective Association.

Prior to this date, fire fighting was provided by companies from the surrounding communities of Harleysville, Schwenksville, Spring Mount, and Green Lane in addition to the Fire Protective Association.  The area was primarily rural with several villages, such as, Salfordville, Woxall, Salford, and Bergey.  Firefighting was a difficult endeavor, with water sources being few and far between.

Over the course of the next several months, the company was formed.  Officers were elected, a charter applied for, and fund-raising began.  All of the members of the earlier loosely formed Fire Protective Association were incorporated as members if they so desired.  The first roster of officers was:

One of the first fund-raisers for the new Fire Company was a carnival, held in May of 1947 on the grounds of the Spring Mount (Lower Frederick) Fire Company.  There were also numerous bingos, raffles, ham shoots, dinners, socials, and paper drives held to raise money for the costs of start-up.   Donations to the new fire company were usually in the form of money or supplies for the truck or the building, but a donation of pigs for sale to benefit the new Fire Company came in 1947. Also the Ladies' Auxiliary served its first Turkey Supper in October to help raise money for the new company, this tradition has continued every year since then.

The fire company's first year was a very busy one.  The company worked to procure a fire engine, land and a building to house the fire engine, equipment for the truck, and places to get water to fight fire.  The Company purchased a 1929 Hahn Fire Engine from the Huntingdon Valley Fire Company for $525 dollars.  At about this same time land was purchased from Floyd Ziegler along Old Skippack Road in the Salfordville section of the township for $1500 (including closing costs).  This is the land that the firehouse still exists on.  The equipment for the engine was purchased throughout 1947.  The fire company secured right-of-way agreements to get at various water sources in the township. By the end of 1947 the fire company was in full operation, but still with out a permanent home for the fire engine.

Soon after the purchase of the land on Old Skippack Road, plans were began to build a permanent structure for the firehouse.   After much debate over the size, shape and design of this new structure it was finally decided to build a brick, two-bay double deep building with a kitchen and basement for a meeting room and storage facilities.  During this time the engine was being housed at Sterner's Garage in Salfordville. The company voted in October of 1948 to insulate and heat the kitchen that was used for the carnivals on the newly-purchased land to house the engine until the new building was completed.  The new building was completed and dedicated in 1952.

In January of 1948 a motion was made to appoint a committee to start a Fire Police Unit.  The fire police unit was voted in at the February 1948 meeting.  The first members included Herbert Schuenemann (Captain), Charles Seal (Lieutenant), Rein Kulp, Milton Frank, Leonard Beck, Monroe Schuenemann, and Floyd Ziegler.  The company voted to purchase them each a hat and a badge.  The Fire Police Unit still exists to this day with 10 active members.

Another early segment of the fire company was the Fire Boys Association.  Very little is known about this organization, except for the fact that many of its members became members of the fire company when they came of age (21 back then).  Notable members include Past President Ron Freed and Past Chief Alton Styer.  Today the company has provisions for junior members and at the time of this writing they are a very active part of the organization.

In 1957 the 1929 Hahn had become unreliable, so the company looked into a replacement.  The company purchased a 1957 International/John Bean 750 gpm Pumper in late 1957 for the price of $15,828.  This truck was later numbered 78-22 when a numbering system was adopted.  This truck was sold in 1989 and still resides in a barn in Salfordville and was last seen in public at our 50th anniversary celebration in 1997.

During the 1960's the fire company received a great deal of assistance from Andrew Lewis Sr, and his son Drew in the form of setting-up and helping the company run Horse Shows under the sponsorship of Liliput Farms.  There were eight of these Horse Shows all together, but were suspended due to the extreme amount of work required by all.  The Lewis Family has continued to be a great help to the fire company.

The Lilliput Farms Horse Shows helped the company purchase two pieces of apparatus.  On June 10, 1963 the company took delivery of a used 1956 International 1300 gallon oil tanker from Young's Oil for $1600.  The truck was then converted by a company called Harwick for fire company use at the cost of $1870.

In November of 1966 the company took delivery of a Dodge Power Wagon Chassis for the price of $2828.  The Body was then built by Hahn and the pump by Hale for a price of $4623.   It was recently reconditioned and continues to serve the company.

In 1977 the company replaced the old converted oil tanker with a new Ford/Saulsbury 1800 gallon tanker.

During the 1980's a brick garage was built behind the firehouse to store extra equipment and the original Fry Trailer for use at the Philadelphia Folk Festival.  Over the years it has been used to house fire trucks as we outgrew the building built in 1952.  Today the garage is used only for storage of groundskeeping equipment and fundraising equipment. Around this time the company also purchased a Dodge Van for use as a personnel carrier which was soon converted in to a rescue truck to hold the new rescue tools we acquired to deal with the growing number of vehicle related calls in our district.

The 1990's brought great growth to the fire company.  The company erected a pole barn for $18,000 to store a new fry trailer and the other large pieces of equipment for use at the Folk Festival.  In 1994 A new four-bay double deep addition was built onto the building along with new offices, radio room, engineer's room and other storage facilities.  The firehouse built in 1952 was remodeled at this same time.  The old engine room was made into a Banquet Hall/ Meeting Room.  The old basement meeting room was converted into a lounge and the kitchen was completely remodeled.  The cost of this project came to $429,000.   This cost was kept down by numerous donations from local business and a lot of blood, sweat and tears from the company membership. Also in 1994 the company purchased a new Chevrolet Pick-up for usage as a utility truck for the folk fest and numerous other events.  Utility 78 was designated 78-81 and remains inservice.

In 1997 it was found that the van was inadequate for use as a rescue and a search was begun for a replacement.   The company found a 1982 International/Saulsbury 250gpm  Rescue Truck for sale by the Goshen Fire Company in Chester County.  The truck was purchased for $25,000 and was painted red and became the first out truck to all vehicle related calls.

In 1999 the company found that the 1977 Tanker needed to be replaced.  A committee was formed and the company purchased a 1999 S & S Infinity Twin-steer 3000gal 1250gpm Tanker for $217,000.  After advertising the old tanker for sale it was found that it would be more cost efficient and of better service to the community if we kept the truck in service.  We now look to specialize in water delivery.

Being a rural company with no township fire tax we are almost totally dependent on fund-raising activities.  These events include; numerous dinners, Chicken Bar-B-Ques, our annual fund drive, and the Philadelphia Folk Festival.  The Philadelphia Folk Festival is held in our township every year for three days in late august.  It takes a lot of work and effort by all of our members to pull this event off every year.  We wouldn't be able to do it without the help of township residents and other friends and relatives from all around the area.  The Folk Fest provides us with a large chunk of our operating budget, and with contracts being signed it will continue to be in the years to come.

This site has been viewed 266,643 times.
Calls
Events
Pictures
Apparatus
FollowTweet
Maintained by the members and staff of Upper Salford Volunteer Fire Company. Designated trademarks and brands are the property of their respective owners. Copyright © 2006-2022. YourFirstDue Inc. All Rights Reserved. Content on this web site is supplied by Upper Salford Volunteer Fire Company. YourFirstDue Inc. cannot be held responsible or liable for any content, text, pictures, or any other media found on this web site.
Management login
Powered by